TV Producer Sanjay Singhal Inspires and Empowers The Next Generation

TV Producer Sanjay Singhal Inspires and Empowers The Next Generation

Speakers for Schools provide state schools with free talks from the UK’s leading figures to inspire & empower the next generation, matching schools to speakers with a shared interest.

The Brighton Digital Media Academy officially launched at BACA in September 2015 and is the focal point for the city’s digital media education for 14-19 year olds.  This new digital media educational offer has been designed to inspire, motivate, nurture talent and support individuals in achieving their full potential.

Sanjay Sanjay is Chief Executive of Voltage TV Productions which he co-founded in 2013 with Steve Nam, former COO of Dragonfly Film and TV Productions, where Sanjay was Managing Director. During his five years there, Sanjay Exec Produced BAFTA nominated “The Plane Crash” as well as overseeing some of the company’s biggest series including “One Born Every Minute”, “The Family” and “Kill It, Cook It, Eat It”.

The talk took place in the main hall and started with an introduction from Sanjay about how he started off in the profession followed by a series of clips from his portfolio each selected to highlight a lesson learnt. From the importance of developing trust and integrity, to knowing when to hold your hands up and own your mistakes, to learning from those mistakes and onto how pushing yourself will stretch your comfort zone further and further, to finally understanding that hard work makes good luck and leads success.

We would like to thank Sanjay for a generous and thought provoking talk and Speakers for Schools for linking us. 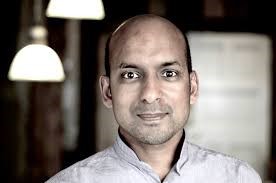