The year 2020 will be remembered for many things but most importantly for showing a determination to stay safe, look out for one another and try to come out the other side of the pandemic in a positive way. The cricket programme was just one way that Brighton Aldridge Community Academy (BACA) and Sussex Women & Girls Cricket embraced this mantra and provided over 50 days of cricket to a wide community of students, players, staff and their families.

As lockdown arrived the Sir Rod Aldridge Cricket Centre was entering it’s busiest week of the year with 14 hour days of activity from the BACA Cricket programme to Sussex Women & Girls, the MCC Foundation Hub, numerous local cricket clubs and Primary School tournaments. Everyone was looking forward to the final indoor preparations in anticipation of a long summer out in the middle.

Suddenly we were faced with online cricket only. The staff at BACA and Sussex Women & Girls quickly turned their coaching styles on their heads to provide a robust and engaging Zoom programme. From Strength & Conditioning sessions in the front room, garden, sharing the kitchen with the pet dog – whatever was needed the players embraced it to stay as fit and healthy as possible whilst the country ground to halt in the fight against Covid-19. Many different online sessions also took place including talking tactics, Q&As with professional players, mental health discussions, team challenges, all of which allowed for the staff and players to keep in touch and find some positive learning opportunities. The fantastic weather of April and May made it even more challenging to stay motivated to train in front of a computer screen knowing you were missing out on great playing conditions to get early runs and wickets under your belt.

The perseverance of the players and staff to keep momentum going for the cricket programmes run out of BACA meant that when the restrictions lifted the opportunities to train and get back to the sport we all love happened swiftly. It was no small feat on behalf of the coaching staff, namely Ian Cox of Sussex Cricket and Alexia Walker at BACA to get the venue Covid-compliant and safely return the BACA students and Susssex Women & Girls to their home of cricket.

For the BACA students this involved twice weekly sessions at school where they could train and see their class/team mates in the flesh for the first time since March. As the traditional MCC fixture date loomed, the highlight of a normal cricket season, the coaching staff marked the week with challenging sessions where graduates returned to test the current squad. Tom Haynes (Loughborough MCCU), Liam O’Brien (England PD) and several other notable Sussex Cricket League players put the current squad under pressure in the nets and shared stories from their experiences. Will Sheffield (Sussex CCC) back in training with the professional squad after injury also ventured down to BACA to oversee one of these afternoons and offer advice to our new crop of fast bowlers.

For the Women & Girls this was a chance to progress their skills in small numbers in the anticipation of some competitive cricket by the end of the summer. Ian Cox and Jack Baldwin provided small group work for the girls’ county squads over a number of weeks with the sessions full of hard work, fun and a welcome chance to be back out on grass again.

Georgia Adams, fresh from the news of being named a regional retained professional for the Southern Vipers, provided the Aldridge Cricket Academy players with training to get themselves ready for competitive cricket. Alongside Jack Baldwin, the Strength & Conditioning Coach for BACA and Sussex Women & Girls, who adapted his sessions yet again to provide outdoor sessions on the BACA outfield for all the players.

Then late July arrived and the cricket square at BACA, normally quite quiet in the school holidays went into overdrive with the wonderful news that competitive cricket could return. No small feat for our Sussex Cricket Groundsman, Dan Millis-Smith, to plan, prepare, and lovingly make the cricket square ready for over 40 matches in 6 weeks. The same amount it normally hosts in a whole season.

We started with an internal school fixture involving many of our Aldridge Cricket Academy students as well as some of our talented Junior Cricket Pathway students and some old faces returning to make up the numbers. Another fixture appeared shortly after with a generous invite from Peter Davies to take on a Lansdowne team in the first competitive fixture of 2020 at the iconic Arundel Castle Cricket Ground. Alexia Walker returned to Arundel a week later with the MCC Foundation Brighton Hub, who are based at the Sir Rod Aldridge Cricket Centre in the winter, to take on Eastbourne and Waverly in a tri-series. Both of these fixtures were truly memorable for the players and their parents who were delighted to have the chance to play cricket again and at such an amazing venue.

It was then over to Sussex Women and Girls as they embarked on an ambitious fixture programme which would see over 40 matches undertaken from the Senior squad all the way down to the U10s making their first outing in a Sussex shirt. The Women and the U17 & U15 squads took on a series of fixtures against local rivals, Hampshire. For the Women this gave an opportunity for the Southern Vipers to finalise their squad by watching the best talent available in our region. For the Junior teams this meant the chance to have some competitive games in both 40 over and T20 formats at home and away venues. A huge thanks to both Sussex and Hampshire for getting these games on.

The rest of the Sussex girls played inter-squad matches at BACA and the delight of being back on the pitch with their Sussex kit on and having huge amounts of fun was wonderful to witness. The crowds of supporters, all socially distanced were some of the biggest we have seen at BACA – the relief at being able to return to a new normal was evident for these families.

As September approached the attention turned to the new school term. A new cohort of Junior Cricketers had committed to BACA taking the number to 12 across Years 7 to 10 in just the second year of the extended programme. This added to the 14 new sixth formers to take the overall cricket squad to over 35 students at BACA. The term began with a fixture versus the MCC to look forward to. A strong side took on ACA on a sunny afternoon with many guests from Sussex Cricket in attendance and our new BACA Junior Cricket pathway students enjoying the match from the sidelines on our new deckchairs kindly donated by the Cricket Society. A fitting day to say goodbye to our graduating students. 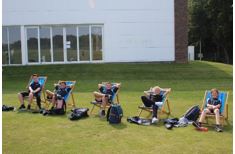 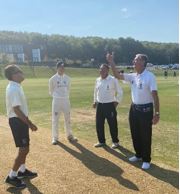 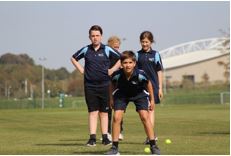 Alongside this finale to the season we were all keeping an eye on the Southern Vipers who were winning after winning in the Rachel Heyhoe Flint Trophy. BACA who will be a satellite venue for this squad moving forward, provided a venue for gym sessions and some training as they got closer and closer to the finals day. The captain of the Vipers, Georgia Adams, juggling, with extreme accuracy, her training/playing schedule alongside her full time role as Coach of the Aldridge Cricket Academy. The feat of managing this only eclipsed by the even more epic performance of being the leading run scorer for the competition, topping 500 runs with her 80 in the Final and securing the PCA MVP award, and most importantly lifting the trophy at Edgbaston as the triumphant captain of the young but extremely talented Southern Vipers team. This squad included 9 Sussex players including former ACA students, Tara Norris and Ariana Dowse. 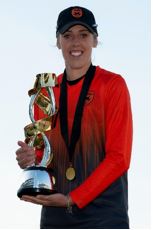 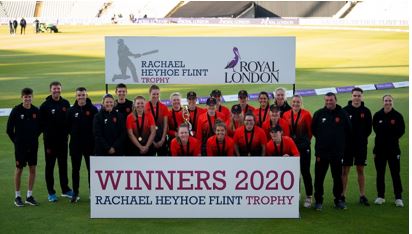 So as the square is being put to bed this week for a well earned rest this winter we can look back with immense pride over how cricket has overcome the huge challenges of 2020 and revived us all in some very trying times. We look forward to a safer 2021 and a return to a full and exciting season for all.

Written by Alexia Walker, Director of Cricket at BACA.

For more information on Cricket at BACA - click here.