Finished a book recently? Tell us about it! Click here to view our guide to writing a book review.

Once your review is finished, please email it to Mr P Lundy - plundy@baca-uk.co.uk. 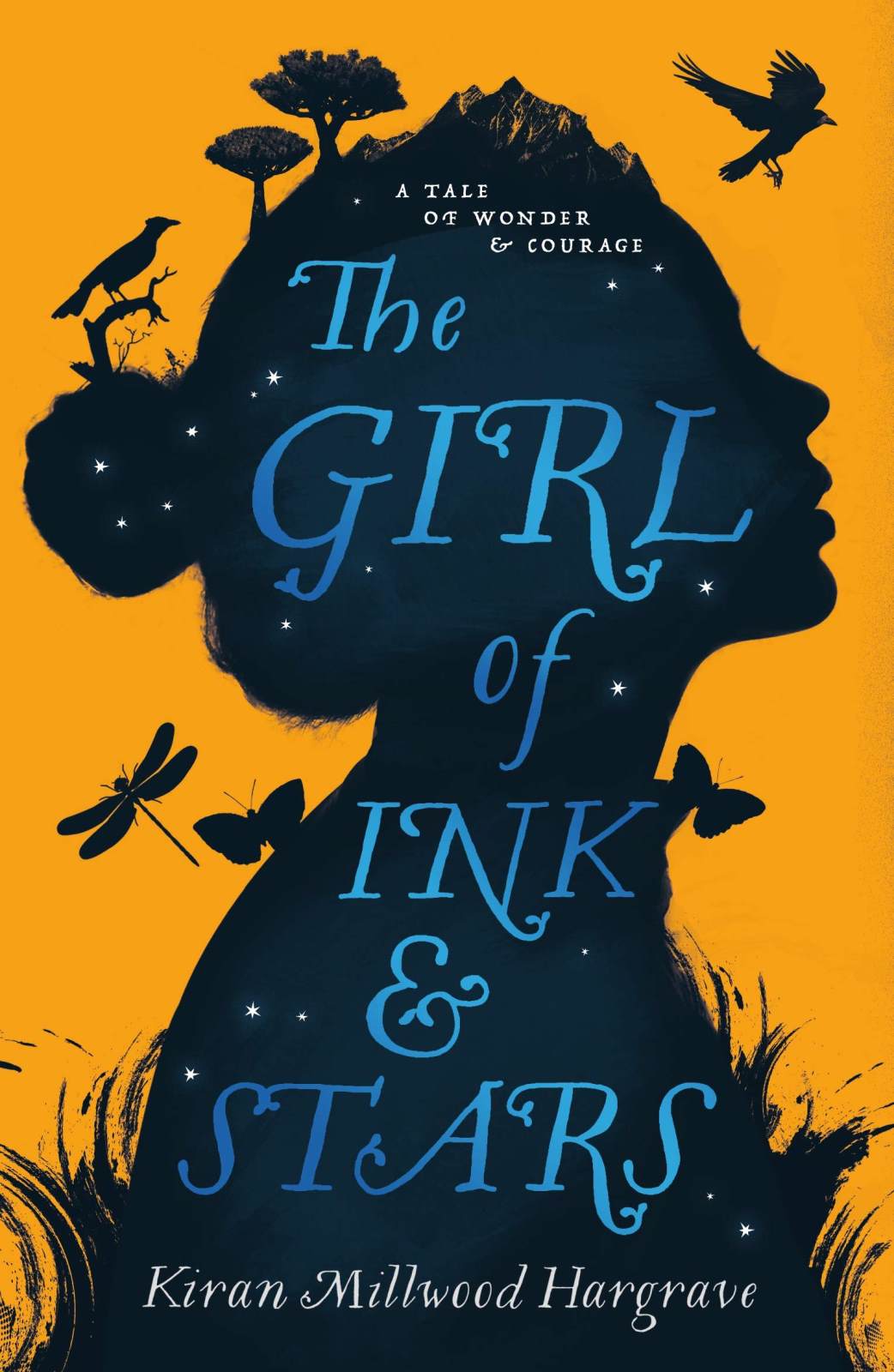 ‘We are all products of our surroundings. Each of us carries the map of our lives on our skin, in the way we walk, even in the way we grow.’

The Girl of Ink and Stars is about thirteen-year-old Isabella Riosse, daughter of a map-maker who lives on the island of Joya. The songbirds of Joya are replaced by ravens when the Governor arrived. Under his strict rule, the people of Gromera are forbidden to travel beyond the forest flanking the village.

One day, a child suddenly goes missing and is then found dead. This is linked to Lupe (Isabella's best friend), and things get a bit out of hand. (understatement of the century!) Isabella gets kind of salty at her friend, because little does Lupe know that she isn’t going on holiday with her dad, but he's running away from the situation he's in. Isabella yells at her, calling her a useless, rotten, coward, making Lupe, the Governor's daughter, who has no other friends as everyone hates the Governor, go in search of what killed the child.

Meanwhile, some islanders have sunk the Governors boat, angering him even more and locking up the ‘trouble makers’ like Isabella’s dad and her friend Pablo.

When the Governor realises that his daughter is missing (finally, great parenting dude, uh huh 101 parenting skills), he decides to go in search of her, and is contemplating taking the only cartographer in town, Isabella's dad, even though he despises him. But Isabella, knowing her dad's leg will make him a liability,  (and secretly wanting not only an adventure but to say sorry to Lupe) asks to go in his place, and proves her map making skills are just as good as her fathers.

But there's a catch...Isabella is pretending to be her dead brother, as they won’t allow a girl on the mission.

Isabella and Lupe: Isabella’s quality of character is further enhanced by her friendship with the Governor’s daughter, Lupe. Though both girls are quite different in personality, Isabella strives to see the good in her friend and, unlike everyone else in Gromera, refrains from holding her stupid father’s actions against her. Their first real disagreement occurs on the day of the abnormal events ruining the lives of everyone on Joya, and Lupe goes missing before they can make amends. Though she’s always longed to chart the Forgotten Territories, Isabella’s primary motivation for joining the team of island explorers is to save her best friend, and tell her sorry for calling her rotten.

Pablo: Journeying alongside Isabella is her longtime friend Pablo, a stable boy with narrow-minded beliefs about what young women can accomplish. His character acts as the megaphone for the book’s theme of exploring gender roles. To join the expedition, Isabella must disguise herself as a boy. Pablo obviously sees through her disguise and he questions her ability to join the team, the sexist little..!

Why I would recommend it:

A story seeping into a legend, and a wacky chicken gracing the pages, it’s impossible not to see the similarities between The Girl of Ink & Stars and Disney’s popular 2016 film, Moana. Unlike Moana, who crosses the open waters, Isabella’s adventure keeps her land-bound (until the end where... nevermind). Rather than take to the waters, she explores black forests, hidden caves, forgotten cities, and demon-dogs. What's not to love, right?

Her crazy adventure is conveyed through straightforward, simple writing that honestly doesn’t use much brain power, so it’s a great read for anytime.

Why I wouldn’t recommend it: 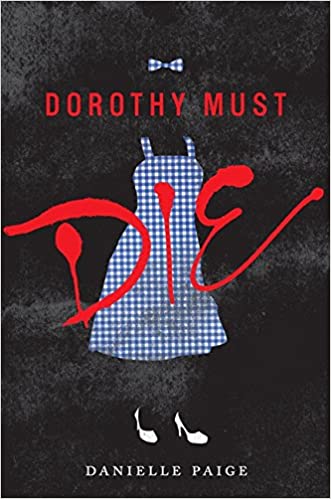 Dorothy Must Die is a book about The Wizard Of Oz, but not like how we know it. It shows  the ‘true’ Oz, Dorothy’s Oz.

It starts off with our main character Amy Gumm, who lives in Kansas and is narrating the story through her own perspective. She is picked on by a bling-bling girl called Maddison who is pregnant, and is called ‘Salvation Amy’ (a rude take on Salvation Army) due to her poor background living in a trailer with her drug addict, alcoholic mum. She then gets whisked away in her trailer (after her mum ditches her) and lands in Oz, only it's not the magic, munchkin filled Oz we all know and love, it's grey and bleak. Why? What happened? Dorothy happened.

Dorothy has returned, and after she declared the happiness decree, hell unleashed, and she took all of Oz’s magic along with it.

Amy Gumm: Our main character, the other girl from Kansas with bright pink hair.
Nox: Both the weird love interest and also her training mentor who teaches how to fight.
Gert: Like your Grandma, but can read minds and is kind of scary but nice at the same time.
Glinda: Tacky pink monstrosity.
Glamora: Glinda’s ‘wicked’ twin sister, who has a witchy OCD or something.
Mombi: Raised Nox and is probably evil. Depends on what you think.
Dorothy: Evil dictator who believes in the crime of sass.
Pete: Emerald Palace gardener. Or is he?
Indigo: Don’t get attached is all I’m gonna say.

I like the concept that anyone can do magic and that it ‘always wants to be something different from what it already is’. However it kind of bugs me that whenever something unexplainable happens they say ‘iT’s mAgIc dOn’T qUeStIoN iT.’

Why I would recommend it:

It’s a great take on The Wizard Of Oz, and hooks you in instantly with this weird parody of everyone's favourite childhood movie, and it’s a great read and will probably last you up to a week depending on your reading abilities.

Why you shouldn’t read it (or just be aware of what your reading):

It’s got a couple of swear words in it and most likely will ruin your childhood! Also, I would not recommend it for the squeamish if you don’t want to hear about the ‘Cowardly’ Lion taking eyeballs out of people's heads for checking Dorothy out. 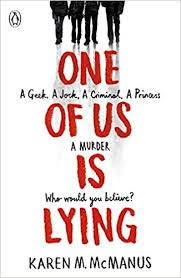 The novel One Of Us Is Lying written by Karen M McManus is based on the story of a teenage murder mystery.

The story begins on Monday, September 24, 2:55pm when 5 students enter detention and only 4 leave alive.

There are many interesting things about the 5 characters which are slowly revealed towards the end of the story. They are all described as typical stereotypes in American movies, for example Bad Boy Nate is described as the criminal of the story and Addy, who is described as the Prom Queen.
The things I liked about this book were the way the writer presented the story; every few pages or so it would switch into a different character's perspective, which gives the reader the idea of how the other characters felt at that time. I liked every bit of the story, there was nothing to dislike about it!

I would give this novel a 5 out of 5 because it drags the reader in on the first page and makes me want to buy the second book "One Of Us Is Next". 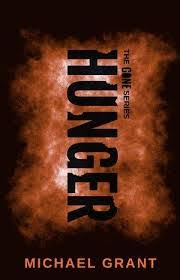 Summary
After kids carelessly ate junk food and let fresh produce rot away in the shop along with the meat, food started to run out in the FAYZ (the new world they now live in). Sam and his friends start to put guards in front of the only store they have, allowing kids to have only 1 can of vegetables a day.

Meanwhile on the other side of town, Caine's classmates are on the edge of starvation and can barely lift a finger, let alone listen to the endless moaning of others complaining about the lack of food. While the kids are suffering, in the desert, the &quot;darkness&quot; as they call it is slowly gaining power by feeding on radiation in a mineshaft. The stronger it gets, the quicker it can use it’s power to harm the people of the FAYZ.

Reasons not to read this book:
This book is extremely dangerous, it has kept me up all night wanting to read it all in one go, proceed reading with caution. 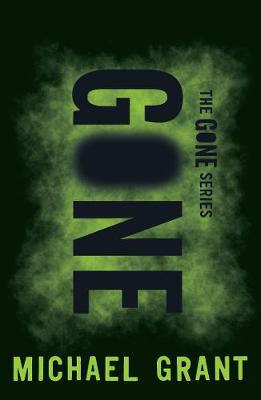 Summary
This book is about adults disappearing in the blink of an eye; anyone above the age of 15. The kids are left to adapt to their new life in unexpected ways. No one is in charge, except for chaos. This new world order starts rising and new rules come into place. Kids start to get mutant powers. No rules. Normal has crashed and burned. Kids start calling this new world the FAYZ. People look up to Sam because he was known as the person who saved the bus driver after he had a heart attack. But kids from the other end of their town have other plans, they know about these powers and they know about Sam's mother's secret.

Why I recommend this book:
I recommend this book to anyone who has read The Hunger Games and Maze Runner. It shows the realistic way kids would react without their parents or older brothers or sisters. This book will change people's minds on how the world would be like without parents. Every page makes you want to read more and find out what's going on. The kids in the book not only change physically, but change mentally as reality hits them. This series has six books and two follow up books.

Event 2/Part 2: The men in grey.
This is the part of the book where our baddies are introduced. No one realises what they are doing, no one even knows they are there. The men in grey convince people to start saving time but little do the people know that all the time being saved is actually going right into the hands of the men in grey. People find themselves having less and less spare time.

Event 3/Part 3: The hour-lilies.
Finally, our young heroine Momo has her moment. She stops the men in grey with the help of Professor Hora, Cassiopea and of course her trusty little hound Lily. For that is the only thing keeping her from being frozen in time like the rest
of the world.

Character profiles
Momo: Momo is a homeless child who lives in a small room at the bottom of the ruins of the amphitheatre. She has a special talent for listening to people talk and just understanding them. She loves playing with the children of the city and giving them ideas for new games.
Guido Guide: Guido, whose real name is Girolamo, is one of Mom’s very special friends. He is a young man who guides tourists around the city and just tells them made up historical stories about it. He also loves just telling Mom stories about anything she wants to hear.
Beppo Road Sweeper: Beppo is the second of Momo’s two very special friends. He is an extremely old man and it is as clear as day where he works. He works as the towns road sweeper. He takes his job step-by-step and loves his work. Sometimes when asked a question he will take days to find the answer. This is purely because he doesn’t want to say anything incorrect.

The men in grey: The men in grey, well they aren’t actually men, let alone humans. All they are made of is stolen time that has taken the form of a human man. They are terrible, all they need to live is hour lilies and their grey cigars.

I recommend this book because it is a very fun read and it makes you think of how we really do spend our time. I think you should definitely read this book.